5 plenaries to move the transition forward!

Participating in Hydrogen Business For Climate is the opportunity to attend conferences of high informational level where 30 international experts share their vision, experience and passion.

The forum hydrogen business for climate

Hydrogen: a commitment for the future of the energy transition

In the wake of the Covid-19 pandemic, major countries and the European Commission announced their recovery plans. This is an opportunity – particularly for European countries – to accelerate the energy transition with the Green Deal, a green pact which will count green hydrogen as one of its pillars. France announced a major EUR 7 billion plan which includes EUR 2 billion to be provided for the 2020-2022 period. Other countries are showing high ambitions. Energy ministers from seven European countries (Germany, Austria, Belgium, France, Luxembourg, the Netherlands and Switzerland) have confirmed, in a joint declaration, their commitment to increasing cooperation in the hydrogen sector. The European Commission presented its hydrogen strategy as well and many regions throughout Europe have taken on the subject.

In practical terms, what role can Europe play, faced with competitors such as China, South Korea and Japan – countries that have clearly made hydrogen a priority and have taken the lead in this field?

How do we develop a world-class industry?

What actions can be implemented locally within regions?

The objective of this plenary session is to hear from European bodies, the French government and of course the Bourgogne-Franche-Comté region. For over 20 years, the region has developed a world-renowned academic cluster which has a strong territorial project on these themes, and which seeks to highlight the vital partnership between regions and Europe for a successful energy transition.

In the automotive industry, hydrogen has lost its first battle so far in competition with the battery. The technology is still too costly to be amortised on private vehicles, except for taxis, for which it is a suitable solution. However, hydrogen wins when it comes to heavy mobility, particularly for utility vehicles and lorries. Hydrogen is technically superior, with high autonomy and integration that does not impinge on payload. Furthermore, refuelling time is reduced to a few minutes, with the same flexibility as filling up with conventional fuel. Hydrogen can also be used in trains as a diesel alternative.

Alstom took up the hydrogen challenge in Germany, where the first Coradia iLint H2 trains were successfully launched. The French manufacturer will develop its offer in France – where the first trains are scheduled to run from the year 2022 – and in Italy. Other European countries, Asia and the United States see hydrogen as an advantage over non-electrified lines. Hydrogen fuel cells will also be integrated onboard aircraft as an auxiliary generator, and hydrogen drones are already being developed. 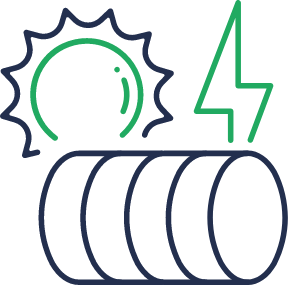 Clear priority is given to green hydrogen from renewable energies. A number of projects based on wind and solar energy are being developed to obtain green electricity and thus ensure more virtuous electrolysis. There are even systems to connect wind turbines directly to electrolysers to increase efficiency. Once obtained, this hydrogen can be injected into existing infrastructure such as gas networks. Operators are also keen to adapt their pipelines to distribute the hydrogen more efficiently, which is then mixed with natural gas. Hydrogen can also be provided in short distribution channels. For example, a station attached to a plant that produces green hydrogen, or that itself produces hydrogen on-demand with an electrolyser.

In terms of storage, hydrogen is generally available in a gaseous state (high or low pressure) or in liquid form. An original form of storage consists of using underground salt caverns down to a depth of 2,000 metres. The hydrogen is confined in impermeable layers of salt. 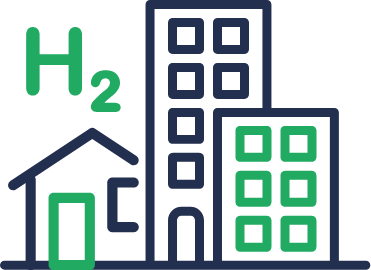 Although still relatively unknown, hydrogen applications are quite varied. Hydrogen is used to supply electricity to off-grid installations, such as mobile phone relays in some countries, or mountain huts. It might also be mix in gas pipes (up to 20%) for cooking or heating.

Obtained from natural gas, hydrogen can be used for heating and hot water without producing CO2 emissions. Eco-neighbourhoods are popping up all across Europe, where positive energy buildings use photovoltaic sensors to produce electricity, and any surplus can then be converted into hydrogen to provide for mobility needs.

Locally, Belfort start-up H2SYS produces hydrogen-powered generators. This product is used to supply energy to construction sites but also to sites in open nature, for sports events or concerts. Larger generators can take over in the event of a power failure in sensitive installations such as hospitals and data centres.

Participate to the plenaries Hydrogen Business For Climate

Register to the Forum S'inscrire