“In Situ” visits for real-world inspiration

The forum hydrogen business for climate

A place of emergence and deployment of the hydrogen sector in France, the Bourgogne-Franche-Comté region and its players make the H2 energy transition visible.

The hydrogen platform (FCLAB, FEMTO-ST) tour gives you the opportunity to visit our facilities. The platform hosts 600m2 of equipments and testbench dedicated to the test of hydrogen components and systems. It has also the ability to reproduce indoor some environmental constraints like temperature and vibrations. It is also involved in the design and realization of prototypes. 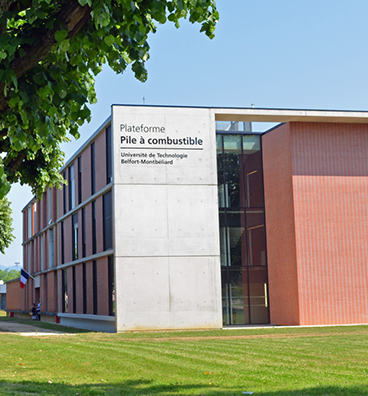 GAUSSIN is an engineering company that designs, assembles and sells innovative products and services in the transport and logistics field. Its know-how encompasses cargo and passenger transport, autonomous technologies allowing for self-driving solutions such as Automotive Guided Vehicles, and the integration all types of batteries, electric and hydrogen fuel cells in particular. With more than 50,000 vehicles worldwide, GAUSSIN enjoys a strong reputation in four fast-expanding markets: port terminals, airports, logistics and people mobility. The group has developed strategic partnerships with major global players in order to accelerate its commercial penetration: Siemens Postal, Parcel & Airport Logistics in the airport field, Bolloré Ports and ST Engineering in ports and Bluebus for people mobility. GAUSSIN has broadened its business model with the signing of license agreements accelerating the diffusion of its technology throughout the world. The acquisition of METALLIANCE confirms the emergence of an international group present in all segments of intelligent and clean vehicles.

In January 2022, GAUSSIN successfully completed the 2022 Dakar Rally with its H2 Racing Truck, the first hydrogen-powered vehicle to enter the race and generate zero CO2 emissions.

In March 2022, Christophe Gaussin was named “Hydrogen Personality of the year” at the Hydrogénies – Trophées de l’hydrogène ceremony held at the French National Assembly.

GAUSSIN has been listed on Euronext Growth in Paris since 2010.

Stay informed the evolution of our program Hydrogen Business For Climate